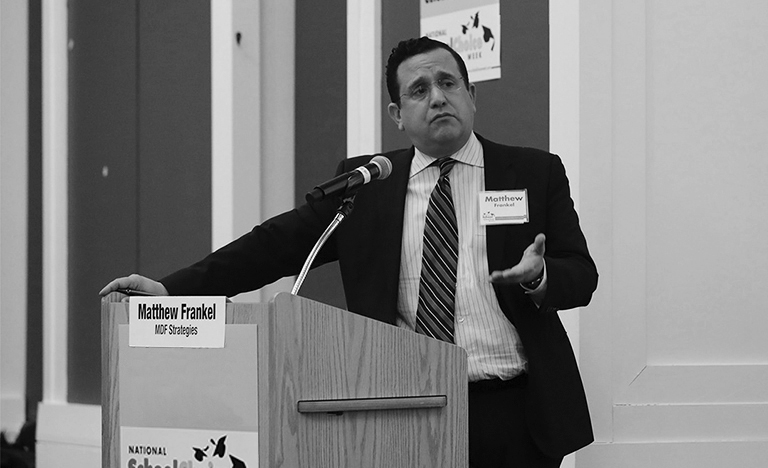 For more than 25 years, Matthew Frankel has worked as a communications and engagement strategist, providing expert and tested solutions to senior executives and elected officials in some of the country's most highly visible corporate, political and legislative environments.

Whether walking down Broad Street in Newark, the red carpet at the Cannes Film Festival, or the halls of Congress, Matthew brings equal passion and expertise to each of his employers and clients.

Before launching MDF Strategies, Matthew served as head of corporate communications for AMC Networks for several years, where he promoted each of the company's entertainment brands and served on the senior team that launched groundbreaking content such as Mad Men and Breaking Bad. In 2007, Matthew joined The Weinstein Company to serve as Chief Communications Officer and Senior Vice President of Corporate Affairs. Only seven months later, Matthew resigned from his position, negotiated out of his contract, and joined AOL, where he reported to Chairman Randy Falco and served as Senior Vice President of Communications.

Prior, Matthew established his skill-sets as a Press Secretary on Capitol Hill, where he worked for House Democratic Leader Richard A. Gephardt, Congresswoman Debbie Stabenow, the Democratic Leadership Council, and various political campaigns throughout the country.

Matthew has worked side-by-side with investor relations, general counsel, and public policy teams in each of his professional roles, supervising communications and strategy between each operating division. As a senior c-suite executive, he directed teams that addressed management shifts and industry relations, developed customized plans to achieve internal and external goals and enhanced brand reputation through data-led campaigns.

After the adoption of his children, Matthew launched MDF Strategies and transitioned his career to service-oriented work within his home state of New Jersey. A dedicated member within the New Jersey community, Matthew has served on the Boards of several organizations, including the Anti-Defamation League of New Jersey (ADL), was a founding Board Member of the Montclair Film Festival, Chair of Bloomfield College's Strategic Planning Committee, and currently serves on the Board of Newark's People's Prep Charter School and as President of the Board of Trustees for the Montclair Local Newspaper. He also helped launch the United Way of Northern Essex County's Family Success Center, where he served as a volunteer career and professional development coach and advised over 400 New Jersey professionals.

Throughout the academic year, Matthew also facilitates Bloomfield College's Emerging and Advanced Leadership Series, which brings leaders and executives from politics, finance, media, non-profits, and other industries to campus to assist students in understanding the requirements of the workplace and developing strategies to create a strong career track for their future.

Matthew and his wife Laura are the parents of two beautiful children, two rescued dogs, who all spend their time in Montclair, New Jersey, and Monterey, Massachusetts.